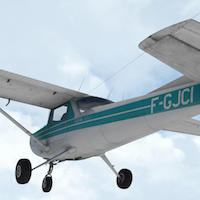 Let me see, is this the ultimate Cessna C152 for X-Plane 11 or are there others on thew market? Carenado has a C152 for X-Plane 10 which is not updated and my feeling says, it will not be updated soon. That’s a shame, and therefore Just Flight, in partnership with Thranda Design, decided to give the Cessna C152 an X-Plane 11 boost! And we’re from X-Plained.Com are pleased to inform you that your personal reporter Angelique made a quick flight impression and she came up with the question … is this the Ultimate C152.

While she made quick ground- and flight impressions, it’s too early to say .., is it the ultimate Cessna C152. Anyway, you could also ask why she’s so enthusiastic?

That’s quickly answered …. it was my PPL aircraft during my flights from KEVB, Florida. And what she sees including the work from Thranda Design, it’s an awesome looking realistic weathered aircraft. Weathered, and not a bit by the way! Weathered in a way that Angelique recognises here own C152 aircraft. I’ve never seen during my flight training C152 aircraft that where so shiny, brand new or just painted to give them that glossy new look. No, all of the C152 I’ve seen where old, had scratches, where dirty, and the paint was far from new.

This is what this modeled X-Plane 11 model has too!

Anyway, please check out these exclusive screenshots we’ve made for you and I shouldn’t forget Just Flight who offered me a nearly finished and almost ready for final release model. More to come soon …..