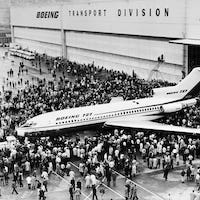 Normally we don’t publish too often real aviation news, but this time I saw an article in CNN Travel that needs your attention.

Boeing’s famous trijet 727 makes last commercial flight
(CNN) — Air travelers will no longer be able to enjoy the Boeing 727’s distinctive design after the jet made its last commercial passenger flight.
Flying a domestic Iranian route, a 38-year-old Boeing 727-200 owned by Iran Aseman Airlines entered the history books in mid-January after a journey documented by journalist Babak Taghvaee on Twitter.
With a raked T-shaped tail and three engines, the 727 drew plenty of attention when it launched in 1962.
The design also served a practical purpose, with the mid-size plane aimed at smaller cities where airports had smaller runways that couldn’t handle the larger 707 jet.

Boeing had initially planned to build 250 of the aircraft, according to the company website.
However, after a slow start, orders for the 727 went through the roof.
Before long the 727 became the first commercial jet design to sell over a thousand airplanes, and 1,832 were eventually built and sold, according to Boeing.
After starting life as a commercial airliner, the 727 has seen its role evolve over time.
“From the mid-1980s, when production ended, the 727 was seen as increasingly noisy and inefficient compared with some of its newer rivals, and many major airlines began phasing the type out from the 1990s,” said Morrison.
Want to read the whole article? Check it out at the dedicated CNN Travel page.