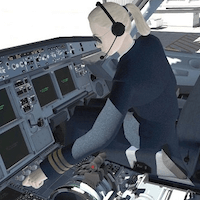 Our dedicated reviewer Andy Clarke took a new challenge in reviewing products; the JARDesign Co-Pilot plugin for the ToLiss Airbus A319. According to Andy “Usually when flying X-Plane models we may be assisted by autopilots and other automated systems and we may be able to view the cockpit with animated figures, representing the the pilot and co-pilot, clearly visible but ultimately we fly the aircraft alone, unless we let X-Plane AI take over. Many aircraft are not designed to be flown by one person and developers have come up with some ingenious ways of allowing us to swap seats or take the co-pilots view.”

Andy continues “JARDesign have approached this issue by modelling a co-pilot who sits in the cockpit with you, interacts with the user and carries out some of the functions and procedures.”