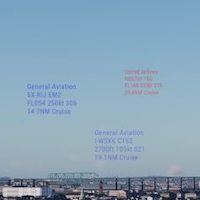 On behalf of Paul Beckwith, X-Plained.Com is pleased to inform. you that we published Paul’s in-depth review of Just Flight Traffic Global for the latest X-Plane version 12. Traffic Global is a plugin that is designed to populate your airports and airspace with varying types of commercial, military and general aviation aircraft without a significant reduction in performance or frame rates. These aircraft add a level of depth and immersion to the simulation environment especially if your flight is not taking place in a multi-user environment.

The aircraft follow realistic flight schedules based on actual airline schedules to enhance the airport environment such that it becomes more engrossing. The plugin can be as simple to use as install and watch the aircraft populate your environment, or it can be as complicated as creating custom liveries for the aircraft generated by Traffic Global.

According to Paul “JustFlight’s Traffic Global is a rather unique addition to that world and is currently one of two such products available for X-Plane 12. Its sole purpose is to add AI aircraft to your simming world at a frame rate cost that is much lower than adding a large amount of X-Plane’s AI capable aircraft to your environment. Just Flight Traffic Global has lived up to its promise and does, in a very satisfying way, solve that problem. My world is now full of active and inactive aircraft that behave in a mostly very realistic manner and add the sights and sounds of a busy airport to my flight experience. I especially appreciate its attention to general aviation activities since that is where I spend the predominant number of my flight hours.”

Curious to what Paul has to write more? Then you must check out his comprehensive Traffic Global review.