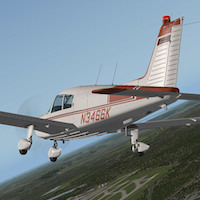 On behalf of Walker from vFlyteAir, we’re pleased to inform you that vFlyteAir has updated their Piper Cherokee 140 Series Original and Classic to version 1.2. Although this update corrects several minor small bugs and adds some new features, it’s always worth to download the latest version. The changes of offers the following:
New Features:
– Adjusting the radio volume knobs now reduces the volume on the NAV-aids morse code audio as well as the COM radios (both models).
– The “ON” label on the PAR200 radio is LIT when the MUTE button is pressed (Original model).
– You can now turn OFF the Garmin 430 power by using the upper small knob marked “C” and rotating it all the way left – the lower knob marked “V” controls the NAV1 Identification morse code volume (Classic model).

The following list are the bug fixes for both models (version):
– User’s menu settings for sound volumes will be restored when unloading the Cherokee and loading another aircraft.
– The Starter Fuse no longer pops out during engine start.
– The propeller will not turn when the engine starter fuse is pulled and the starter button is pressed.
– The radio volume now properly controls the NAV audio volume.
– The g430 GPS NAV frequencies are now controlled by the g430n1_frequency_xxx data refs.
– The ignition key receptacle texture was rotating when starter button pushed – now only rotates with magneto setting as it should.
– Roll and pitch rates dampened to provide more realistic flight.
– Fixed the fuel tank indices so that left wing tank is [0] and right wing tank is [1]. This makes fuel tank selection compatible with other plugins.

The following list are bug fixes for the Original model only:
– PAR200 radio LED screen is now unLIT with radio power off.
– The PAR200 radio volume knob properly controls the radio squelch noise and the nav-aids morse code sounds.

The following list is a bug fixe for the Classic model only:
– The STEC55 autopilot now displays “ALT” and “GS” properly when intercepting and engaging an ILS Glide Slope.

As usual, more information can be found at the dedicated vFlyteAir Cherokee 140 web page.