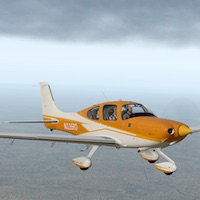 We’re pleased to inform you, on behalf of vFlyteAir, that they have released a big update for their Cirrus SR20 version 2.5.

According to Walker “Mario made a lot of improvements to the G1000, and we’ve partnered with Alan Shafto at AeroSimGaming to help us improve the flight model. This version also uses the new FMOD sound system.” But theres’ so much more to tell you. The model update is made dedicated for X-Plane 11. And, here’s the change log list with all new features:

Improvements to the moving map:

Improvements to the PFD:

Improvements to the electrical system:

Four new liveries, one created on request, see this link.

Added some little details for immersion:

Want to see more and want to see all the bug fixer? Then you must check out the following dedicated vFlyteAir link.