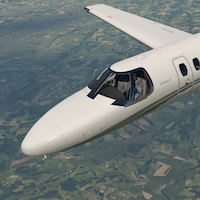 It’s such a day as usual in the Netherlands … colder then normal or at the weather forecast they will say … it’s hotter than average. To me it feels cold, windy and whatsoever. Time to do what I promised already a while ago …. flying to France and see how the Carenado Cessna Citation flies.

It’s a long time back that I worked as ground engineer on a Citation. Not this model, but I believe one of the first 500 Series, when I’m right. It was a terrible aircraft to work at. It was small, and it had installed systems as you see in large commercial jets. Working in the cockpit was not a pleasant job, working in the tail was really a disaster. But flying the Citation 550 II from Carenado is fun.

I took virtually off from LFBD (Bordeaux–Mérignac Airport) and created with Little Navmap- one of my favorite nav planning programs – a flight plan to the Pyrenees, and then heading for the Méditerranée and finally back via Frejus to Bordeaux. The created flight plan has the X-Plane 11 “fms” format and the installed navigation equipment is the default X-Plane 11 FMS MCDU. For weather I use already for a while the FlyWithLua scripts and Environment+ lua script. I decided to go for real weather via the Laminar Research weather server.