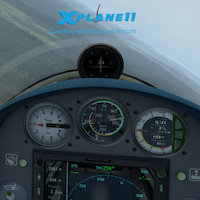 The screenshots where made above Germany somewhere near Dahlemer Binz. Arthur decided to take a glider flight with the Aerobask Antares 20E. For those who aren’t familiar with this glider … the Aerobask Antares 20E is a modern high performance open class glider. Self-launching motor glider with a 42-kW electric motor and lithium-ion batteries. It can climb to 10 000 ft on one battery charge, without loss of power with altitude. Vne 150kts. At typical take-off weights, max climb rate is 750ft/min.

On behalf of the X-Plained team, many thanks Arthur for taking the time to make them for us and to send them over. And now … who follows?