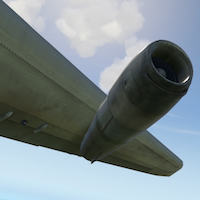 But for now, enjoy these screenshots and as promised to myself … a review is in the making. But why did I chose the DC-8 and not his B707? I was working in the aviation as a mechanic and while I was working on the old-fashioned DC-9-30, I’ve seen at Schiphol Airport many Douglas DC-8 aircraft, in particular from the KLM and some other companies. I was impressed by, for example, the length of the DC-8-63 – also included in the package – which was almost of the same size if the Douglas DC-10. During that time, I’ve seen more DC-8 aircraft then Boeing 707.