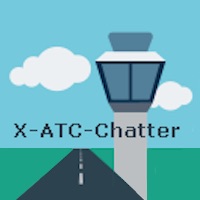 On behalf of Stick and Rudder Studios we’re pleased to inform you that X-ATC version 1.6 has been released.

According to Mark from Stick and Rudder Studios; We have added over 1,300 new clips to the Canadian region. We have also significantly enhanced the X-ATC-Chatter stand-alone player in version 1.6. Here are some of the changes:

Cleared any OpenAL errors before calling any OpenAL API’s
Changed facility frequency tuning to checkboxes for better visibility
Removed duplication of tower and Unicom at the same airport when both were assigned to the same frequency. In that case only the tower will displayed.
Added support for VR on X-Plane 11.2
Added Canadian center transmitters
Added generic center transmitters for the rest of the world
Added support for pop-out windows for X-Plane 11
Added filtering of facilities for the Nearby Facility UI
Increased the radius of nearby facilities UI to 75 NM
Upgraded to the newest X-Plane SDK
Added support to select multiple regions for chatter. This will allow you to easily combine similar regions like the U.S. and Canada to increase the clip count and reduce repeats.
Added support to monitor COM2 for Center Override when using X_Plane ATC outside the U.S. where we do not have good Center tuning detection.
Fixed a bug where X-ATC-Chatter would attempt to play non-wave files that were inadvertently placed in the controller directories. Prior to this fix X-ATC-Chatter would crash X-Plane when it attempted to play these non-wave files.
Added support for clips to go to a separate audio device on Windows and Linux
Rearranged controller order so that it was in the logical order of an IFR flight
Added commands to select next and previous IFR controller when not using automatic controllers
Added an option to pause chatter when the camera view is external
Added more clips to Canada and the U.S.

We have also added some additional clips in the U.S. but the major additions are in Canada. Here are the current clip counts for 1.6:
United States: 1,706
Europe: 1,320
Canada: 1,779
South America: 0
Asia: 0
Africa: 0
Oceania: 130
If you had previously purchased X-ATC-Chatter you may have already received an email from Gumroad informing you that the collection has been updated. That email would have provided you a link to view and download the new version. You can also use the “View Product” link in your original Gumroad X-ATC-Chatter receipt email to access the new version of the collection and player.

If you do not currently own X-ATC-Chatter you can download a free demo collection via this link.

I would like to thank our volunteers who help collect the clips for X-ATC-Chatter. I would also like to thank all of you for your continued support of Stick and Rudder Studios.