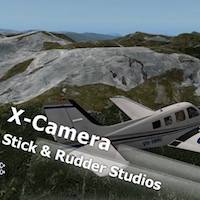 We’re pleased to inform you that Stick and Rudder Studios has released a new version of their well known X-Camera.

Mark from Stick and Rudder Studios would like to thank our volunteers who helped test the beta version of X-Camera. I’ll be starting work on X-Camera 2.4 in the coming weeks. 2.4 will be an X-Plane 11 only release and will feature a new UI with pop-out windows.  By the way, here’s the change log list of version 2.3.3:

More information can be found at the Stick and Rudder Studios X-Camera web page.