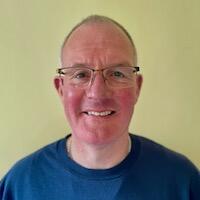 It’s not easy since Bruce lives in Boulder, Colorado US, while Andy Clarke lives in the UK, Angelique in The Netherlands and Marc Leydecker for example in Virginia, Gloucester US. Anyway, we from X-Plained.Com think that this is “a” possibility to know the writers, the owner, the SketchUp modeller and developer a bit better with these articles.

Therefore we’ve decided to introduce ourself to you. Bruce Knight, one of our dedicated reviewers starts with this bio, followed by Angelique and it is time for Andy Clarke.

Andy was born in Mansfield, England and grew up in Newark on Trent. After attending school In Southwell my work caused me to move to South West England. I remain living in the UK with Linda and our German Shepherd Ragnar.

Growing up on the Lincolnshire/Nottinghamshire border meant that our house was in a military flight area with Vulcans from Scampton and Waddington, Jet Provost from RAF College, Cranwell and F4 Phantoms from Coningsby regularly over-flying the house along with less frequent visits from other military aircraft. I attended my first air display with my Dad, at the age of nine or ten, at RAF Waddington and clearly remember the demonstration of a four Vulcan scramble. It is difficult to forget! My interest in aviation continued through secondary school, during my breaks from playing rugby, and I attended several more air displays as well as going gliding with the RAF at RAF Newton. I applied for RAF air crew selection but was unsuccessful due to colour blindness and so my career path took another route.

I have never qualified as a pilot due to limited time for flying opportunities through work but Linda paid for me to have a flying lesson which I thoroughly enjoyed and she showed her courage by going along in the back seat. In 1990 I volunteered to assist at the Royal International Air Tattoo. That year it was held at RAF Cottesmore but then returned to RAF Fairford. I continued as volunteer until the year I retired in 2013. It was a privilege to work alongside other committed volunteers, full time staff and military personnel and the opportunities it created to be close to some special aircraft were very interesting. These included being allowed in to the Lancaster of the Battle of Britain Memorial Flight and watching the deck crew of a United States Navy F18 go through the whole of their flight preparation drill with no verbal orders just hand signals from the team leader. RIAT also gave me the opportunity to attend a display at AFB Swartkop, Pretoria, South Africa when I was taken up in an Alouette helicopter to observe incoming weather. Back at home I was also taken out as a guest on a training flight of the RAF Rescue helicopter from RAF Chivenor and witnessed the skill and professionalism of the team.

In terms of aircraft simulators I first started using Microsoft Combat Flight Simulator of various versions and also Flight Simulator up to FSX. Due to recommendations from friends I moved from a Windows computer to a Mac and as X-Plane was the only sim I could use I started on XP10. My use and understanding was really limited to VFR flights, as I did not know how to use the instruments. I was reading the X-Plained site and saw that Angelique was looking for others to assist with reviews. I saw this as an opportunity to learn far more about X-Plane and the various aircraft as I had to use them properly to write reviews. Luckily Angelique accepted me to assist. I do not claim to be an expert in computers, X-Plane or flying and I need to thank Angelique for her patience, assistance and guidance. I try to write reviews from the point of view of a recreational user and to include detail and experience that I would find useful if I were considering the various pieces of software.

Outside of writing reviews I am now retired and living in the countryside. I spend my time at home and also walking Ragnar. We have a caravan for holidays and use it to explore the different areas of the UK. I enjoy reading especially around history and of course aviation. I look forward to learning more about X-Plane and improving the standard of my reviews.